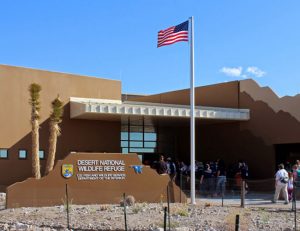 Just minutes north of Las Vegas sits the largest national wildlife refuge outside of Alaska. A decade of planning by the U.S. Fish and Wildlife Service and multiple design and construction teams has at last culminated in a new 10,000-square-foot visitor center that includes administrative offices, bookstore, meeting rooms, exterior access restrooms and a large display detailing the land’s history, people and animal species, including three stuffed bighorn sheep scaling a rocky slope.

The project was designed and built with 8-inch-thick concrete walls for insulation, and an unusual heating and cooling system that uses water cycled from an existing pond to maximize building efficiency which led to the project attaining the highest certification for sustainability from the U.S. Green Building Council, LEED Platinum, in 2014. Outside work includes trail improvements with most being handicapped accessible, solar covered carports in the parking lot and the addition of native landscaping to blend the project to its surroundings.